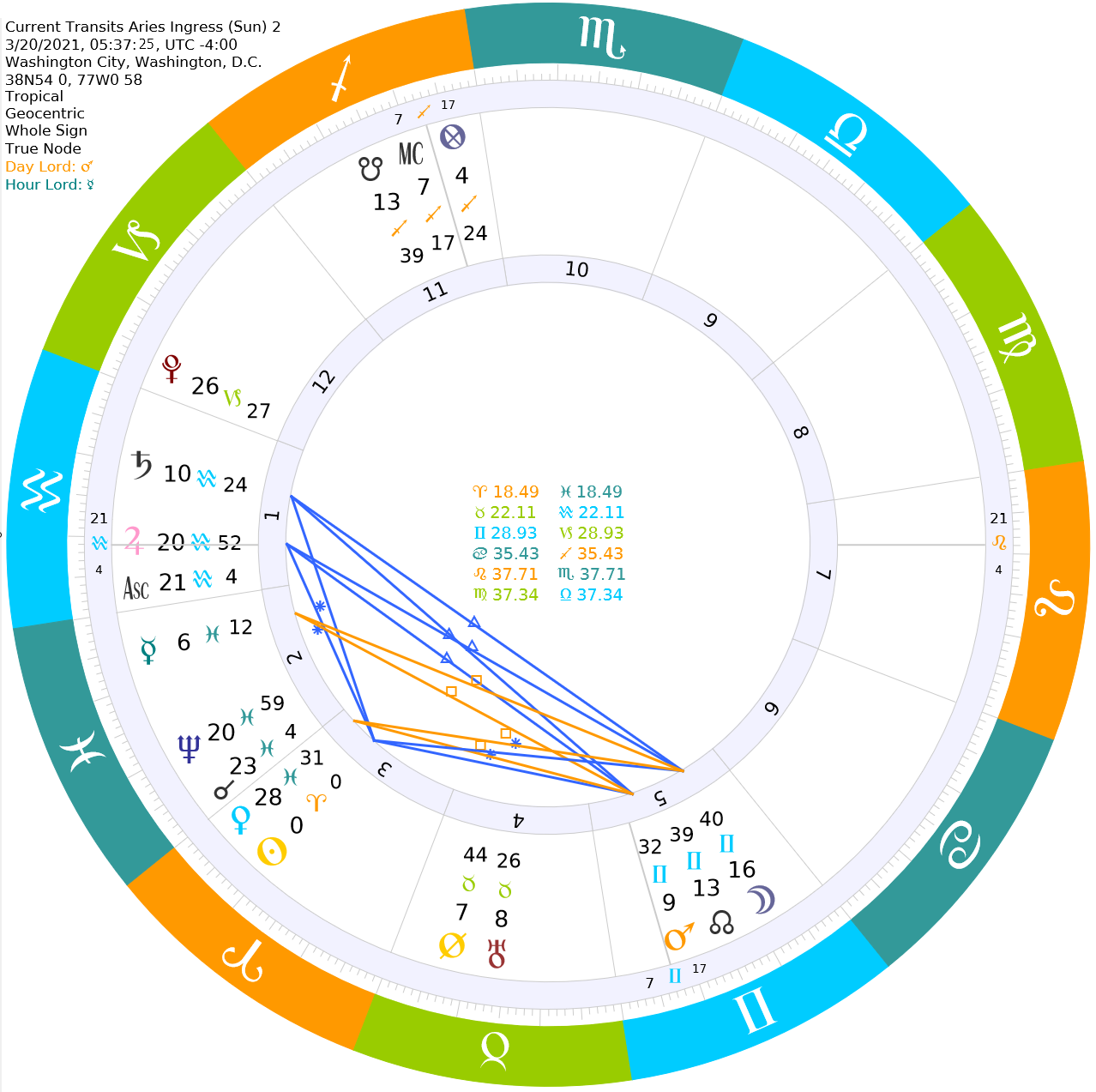 I’ve written in previous posts that the Aries ingress chart is traditionally used to predict the year for mundane astrology (here and here; you can also read about some of the overall planetary changes and movements for 2021 here). Of course, eclipses, major planetary shifts, etc., are taken into account. But the one thing that is predictable every year is the Sun entering into (ingressing to) Aries at the equinox.

Sidebar: The Spring Equinox and the Zodiac(s)
In Indian/Vedic astrology, the Zodiac starts when the Sun arrives at a particular star in the constellation of Aries each year. Because it’s based on the relationship of the Sun to a star, this is called the Sidereal Zodiac, from the Latin siderum, meaning “star.” From there, the signs are divided into 30 equal segments.
In Western astrology, which is what most people outside of Asia are referring to when they say “astrology,” the Zodiac starts when the Sun crosses the celestial equator moving North. We designate that point as the beginning of Aries. Because this is based upon the relationship of the Sun to the Earth (rather than a particular star or group of stars), and it follows the course of the Sun’s journey from “touching” the Tropic of Cancer, to moving South of the celestial equator, to contacting the Tropic of Capricorn and back North again, we call this the Tropical Zodiac.

The Aries Ingress is the moment that the Sun crosses the equator heading north. Of course, we know that the Sun doesn’t actually “cross” the equator. But the Earth’s tilt and its revolution around the Sun combine so that from our perspective, the Sun is – for the next six months – going to appear above the celestial equator.

Here are three images where you can see the difference. These are all for the same time of day, with the atmosphere removed so that you can see the stars and the background. The blue circular line is the celestial equator, which is just the Earth’s equator projected into space.

There are a few key features I’d like to highlight. Note that this chart is set for the USA’s capital city.

Remember that this is a snippet of this chart, and the ingress chart is not the only thing we use to predict the year ahead. But just these few features alone outline the past year pretty well.

Here the Sun is in the 3rd house of siblings, neighbors and neighborhoods, and early or local education. This is likely to show how we will continue to be somewhat restricted in our movement this year. The Sun rules Leo, which is the 7th house here, representing in general “others.” So we will probably be seeing others visiting in our neighborhoods, rather than a lot of going out on the town.

The rising sign (the people) is Aquarius. This is a fixed sign, so according to Masha’Allah (8th century) in On the Revolutions of the Years of the World, this chart will be in effect for the full year until the Aries Ingress in 2022. We see that Jupiter is less than a degree from the Ascendant. Jupiter is the greater benefic, and while his ability to “perform” is not unbound in Aquarius, it’s far better than it was last year in Capricorn. The Midheaven is in Sagittarius, and while in the 11th house, it always shows the president and/or the administration. (The Midheaven or MC usually falls in the 10th house of government leader, but can sometimes be in the 11th or the 9th. Regardless, it will import some of the meanings of the 10th into the 11th or 9th when that happens). Jupiter rules money and abundance, and we see here the probability of the government being very generous with the people. In fact, a significant stimulus package has just been implemented, with much of it going to the lower income earners in the country (as opposed to tax cuts for upper income earners like last year’s stimulus bills).

Saturn is not far away from the Ascendant, also in Aquarius, which he rules. This is a sign of public works and a good indication that we will see some major infrastructure projects this year. In addition to ruling the first house, which he’s in, Saturn rules the 12th of isolation. So we’re not out of the woods this year with social isolating. We still have a ways to go.

Jupiter and Saturn conjoined recently, which they do only every 20 years. This time it was in Aquarius, and while they are no longer conjunct, they are still co-present, that is, in the same sign. This heralds a time of building of public works, and we’re sure to see some of that beginning already.

The fact that Jupiter rules the Midheaven, which has the Part of Fortune right on it, and is in pretty good shape right on the Ascendant, shows the probability that the administration will be at least somewhat successful, and that it has a real connection to the people. The Moon is the other indicator of the people, and she’s in the 5th house of fun and children. She’s also in Gemini, an air sign, showing that our fun might be more mental and verbal, rather than in person and contact-based. She’s separating from Mars, indicator of fevers and inflammation (in an air sign that rules the lungs), and she (the Moon) rules the 6th of illness. This separation from Mars indicates the eventual fading of much of the focus on Covid.

The last significant piece we should mention is the economy. The 2nd house rules money, and Pisces is there, ruled by Jupiter. We’ve already seen Jupiter’s decent condition in Aquarius, right on the Ascendant, and his rulership of at least a part of the president and the administration for the year. So this is generally a good sign. However there are a few things to watch out for. Pisces is mutable, so it’s likely to be a year with a lot of financial flexibility, and hard for folks to really save; but that shouldn’t be a surprise. Also, with Neptune there, there is a certain amount of the unknown or unstable going on. Neptune is anti-physical and shows areas where it’s nearly impossible to get clarity. So this is another sign that we’re still “in it” for the long haul.

Overall, 2021 looks like a far better, healthier year than 2020. But then that’s not saying much. It looks decent overall, but we shouldn’t look for Covid-19 to just disappear or for our collective health or economy to make a magical recovery. If this chart showed up at any other time, it would probably look like an average year. Following 2020, it’s not going to be enough to erase the horrible, terrible, no good year we’ve all just had. But it’s a start.