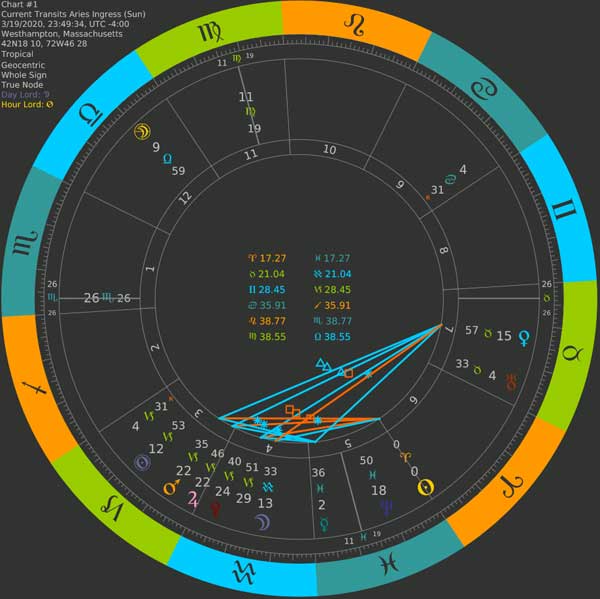 In my post a few weeks ago, You Say You Want a Revolution…, I presented the Aries Ingress chart as one of the foremost ways that traditional astrologers would forecast the coming year. The actual term for this was a “revolution,” which simply means a “return” (re=again, volve=turn). I took a brief look at the Aries Ingress or 2019 and or 2020, specifically with the current COVID-19 crisis in mind. For more details, see that post.

The Aries Ingress is the moment that the Sun enters the sign Aries. This is what defined the March equinox (Spring in the Northern Hemisphere, Fall in the Southern). It’s the beginning of the astrological year.

According to Masha’Allah (8th century) in On the Revolutions of the Years of the World, if the Ascendant of the Aries Ingress chart is a fixed sign (Taurus, Leo, Scorpio, Aquarius), then this chart will endure for the whole year, until the following Aries ingress. However, if the Ascendant is a mutable sign (Gemini, Virgo, Sagittarius, Pisces), then the chart will be in effect until the September, six months later, at which point a new chart will need to be generated for the moment the Sun enters Libra. When the Ascendant is a cardinal sign (Aries, Cancer, Libra, Capricorn), then a new chart needs to be cast for each season, and each of these will last only about three months. The Aries ingress chart will be in effect for the Spring, the Cancer ingress for the Summer, the Libra chart for the Fall, and the Capricorn ingress for the Winter.

The chart above is cast for Washington, DC, the capital city. The Sun entered Aries on March 19, 2020 at 11:49 PM Eastern Daylight Time. We can see on the left that the Ascendant is Scorpio, a fixed sign. So the chart will be the only one we need to forecast mundane events (like politics) for the year. One way of knowing when the “hot spots” of the year will occur for the country is to look at what quadrant the Sun falls in the ingress chart.

If the Sun falls in the upper left quadrant, above the eastern horizon, then the highest time of activity will be in the first quadrant of the year, that is, the Spring, between the equinox and the Summer Solstice. When the Sun is in the second quadrant, the upper right, then the period from the Summer Solstice to the Fall Equinox will be the busiest. If the Sun appears in the third quadrant, the lower right, then the Fall will hold the most activity. And if the Sun is in the fourth quadrant, lower left, then the Winter, between the December Solstice and the next equinox, will hold the action.

Here the Sun is in the third quadrant of the Aries Ingress, showing that the Fall will be the most “exciting” time. This make sense, given that we have a presidential election coming up in November.

The Health of the Nation

In this, part 1 of considering the Aries Ingress for 2020, I want to focus once again on the issue of health and illness, given that we are still currently in the middle of the COVID-19 pandemic.

The first house, along with the Moon, shows us the condition of the citizenry. The chart here has Scorpio rising, with no planets in Scorpio. It’s ruler is therefore Mars, which is in Capricorn, where it’s exalted and quite strong. He’s also conjunct benefic-though-debilitated Jupiter in Capricorn. These two are applying to conjoin Pluto, which will intensify the conditions. Mars is representative of fevers, and Jupiter the lungs. The fevers are strong (Mars is exalted here) and the lungs are weak (Jupiter is debilitated by being in fall). Fevers are attacking weakened lungs.

17th century English astrologer William Ramesey, in his Astrologia Restaurata, instructs us to look at the Ascendant, its ruler, and the Moon of the ingress chart to see how the nation will fare health-wise. The Ascendant ruler, Mars, is strong, showing the nation coming through this. But it’s not without a lot of damage along the way.

Mars is also the ruler of Aries, which here is on the 6th house, representing the potential illnesses of the citizens (1st house = health, 6th house = illness). So here we have the ruler of illness being the same as the ruler of health. This is a fairly clear indication that the actions of the people (1st house) are causing their own illness (6th house). In other words, to a certain extent, this is in our own hands. Which is what social distancing is all about.

The Sun is always the focus of a solar ingress chart, and we see here that it is also in the 6th of potential illness and the nation’s work force. The Sun and the 10th house are also indicative of a country’s leader, in our case, the president. Coincidentally (or not), Leo is on the 10th house of this chart, and Leo is ruled by the Sun. So we have a concentration of symbolism. With the Sun in the 6th house, another traditional interpretation is that we are sick because of the president.

The really good news here is that none of these rulers — the Asc ruler (Mars), 6th house ruler (Mars), Moon, Moon’s ruler (Saturn) — aspect the ruler of the 8th house (Mercury) at all. This is an indication that death may not be as bad as we fear from all of this. We can only hope.

In Astrologia Restaurata Ramesey also tells us that when we are considering the health and/or illness of a nation in a given year, we need to look at the Full or New Moon immediately preceding the Aries Ingress. In this case, the chart was for the Full Moon on March 9.

The Ascendant is Cancer, again with no planets there (though the presence of the North Node is protective). Cancer is ruled by the Moon, at 19 Virgo here. The Moon’s ruler is Mercury, in the 8th house of death in Aquarius. Also, Mercury is at 28 degrees Aquarius, and has just turned direct after a retrograde. When it returns to Pisces in 2 degrees, it will lose a lot of dignity. This is really problematic from a health standpoint.

This is a very contrary read from the ingress chart. In addition to what Ramesey tells us to observe, there are a few other important, and troubling, features to this chart.

Mars, which rules the Ascendant of the ingress chart, is here placed at the very degree of the Descendant, a degree traditionally known as the “portals of death.” It’s the place on the western horizon where the Sun and other planets “die” each day as the Earth turns.

Also, Jupiter, the ruler of the 6th house (illness), is in fall in Capricorn, and conjunct Pluto, lord of the underworld. The Moon has just made the trine to Mars and is applying to trine Jupiter also.

One good feature here is that the ruler of the 6th and the ruler of the 8th do not aspect one another. Jupiter (6th) and Saturn (8th) are both in Capricorn. Jupiter is approaching a conjunction to Saturn, but they are both slow-moving planets. And before Jupiter makes the connection with Saturn, Saturn will move into Aquarius, essentially “escaping” from the approaching aspect. This is a type of refranation. Again, this indicates a lessening of the loss of life possible.

A Note on the Economy

In the Aries Ingress chart, the 2nd house, representing the nation’s economy (along with the 8th), is Sagittarius. It’s ruled by the Jupiter in fall in the 3rd house, conjoined by the powerful Mars we’ve discussed.

In the Full Moon chart from immediately before the ingress, the 2nd house is Leo, ruled by the Sun. In this chart, the Sun is very tightly conjunct Neptune, indicating a complete lack of security and knowledge about what’s going on with the economy. It’s in the 9th house, showing that the insecurities are also tied to foreign countries, most likely through supply chains.

All in all, it’s a pretty serious read for the health of the nation. It could certainly be worse. But looking at more than one chart can help give a more nuanced view of what’s to come this year.

In part 2, I’ll take a look at what’s likely coming up in other areas of the nation’s life this year.