Gardening by the Moon 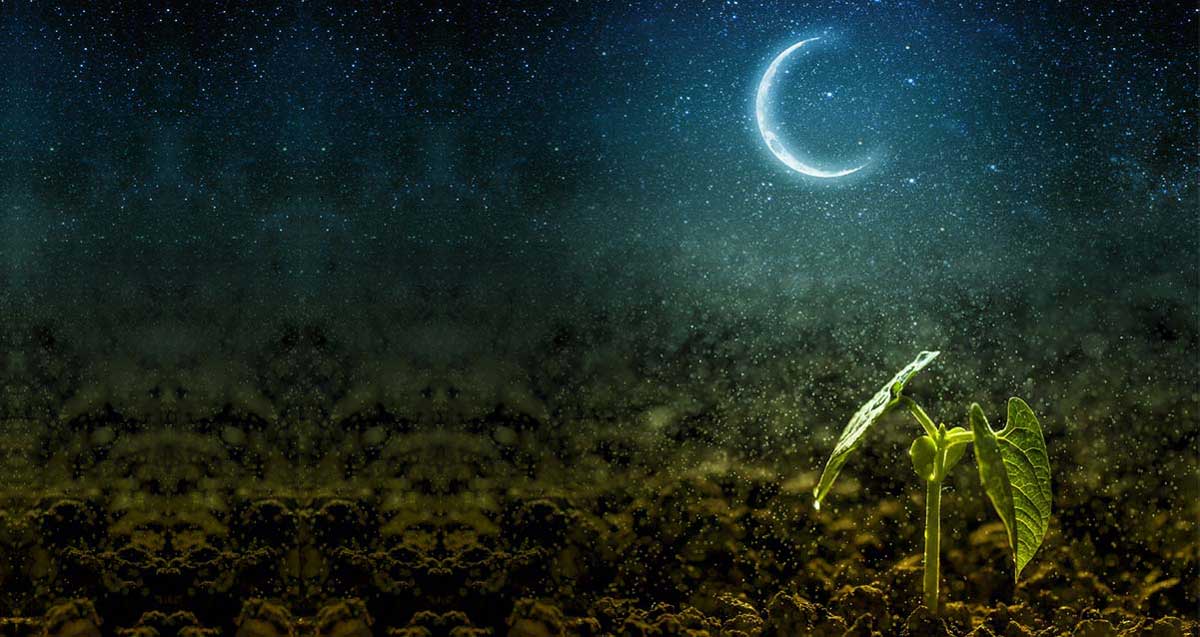 Gardening according to Moon cycles, or Agricultural Astrology, is a very old and respected tradition. As early as the 1st-2nd century CE, the famous compiler of information (and possible astrologer) Claudius Ptolemy reported that Roman farmers planted by Moon cycle.

In fact, gardening by the Moon is probably one of the earliest types of astrology. The Moon is very observable, and even when it’s cloudy, folks close to the Earth who watch the Moon regularly will know how she moves over the course of a few days, and what phase she’s in.

But farmers can go even further than waxing and waning Moon phases, and consider all twelve signs of the zodiac, specifically their elements — earth, air, fire, water — when deciding when to plant or transplant fruits, vegetables, and flowers.

Many people who are unfamiliar with (or even perhaps eschew) astrology rely consistently on the Old Farmers’ Almanac for planting advice.

In addition to the lunar cycles, we are obviously limited by solar cycles. Here in the northern hemisphere at about 40º of latitude, we can’t really plant cold-weather crops in the ground until late March, at the very least, if not later. And anything that’s more delicate usually has to wait until late May.

That gives us a fairly short growing season compared to tropical zones. Given that we have only two months or so when we’re planting, it can make catching the right lunar phase during those months a challenge.

When I started keeping fruit trees, I was surprised to learn that there was such a thing as “winter pruning.” The apples and pears seem so delicate and brittle still, why would we take shears to them now?

But winter pruning, it turns out, is for growth. Shoots on the trees have small nodules on the ends that control the growth hormones for that shoot or branch. They minimize growth. By clipping them off strategically, the tree will send its energy there during the next few months, producing new shoots. These shoots will produce new buds, and eventually, new locations for fruit.

(Pruning fruit trees for shape and serious trimming should happen right after the Summer Solstice, when — even though we’re not aware of it — trees are already starting to put their energy into their roots to get ready for winter. This will help the tree not to respond to the newly pruned areas and send a bunch of energy there.)

The midpoint of this waxing phase of the Sun is the Spring Equinox, near the end of March. It’s akin to the first quarter Moon. But just like a Moon cycle, if we’re trying to tap into that energy, we need to start our action before the first quarter. So many fruit trees are pruned in February and March, when it seems like Spring is still a long way off. Or at least it did before climate change became so prevalent.

This weekend, on Friday and Saturday (Feb 28 & 29, 2020), we are still more than three weeks before the Spring Equinox (in the northern hemisphere). And the Moon will be waxing. And she will be in Taurus, where she is exalted.

As a matter of fact, the Sun and the Moon will be in almost the same phase as each other. In other words, there are about 90 days between the Winter Solstice and the Spring equinox. The Sun will have traveled about 70 of those days by this weekend (about one degree per day). There are about 90 degrees of travel across the sky between the New Moon and the First Quarter Moon (about 8 days). This weekend, the Moon will have traveled between 60 degrees (by noon on Friday) and 72 degrees (by noon on Saturday).

Astrologically, it doesn’t really mean anything that the Sun and the Moon are in exactly the same phase. After all, since the Moon transits the entire cycle in a month, at some point along the way, she will mirror the Sun’s position in his own cycle.

But I do find it interesting that they are both at the perfect points in their respective phases for pruning and laying out the garden plans for this year (if not for planting yet in zones 3-6).

I’m still a novice when it comes to pruning and growing fruit trees, so I’m not going to give advice here on how to do it. There are good resources online and in books for that. But I do know that now is a great time to do it! This weekend we are blessed with a perfect alignment of Sun, Moon, and Stars to get out there and plant the seeds of our own Spring Fever.