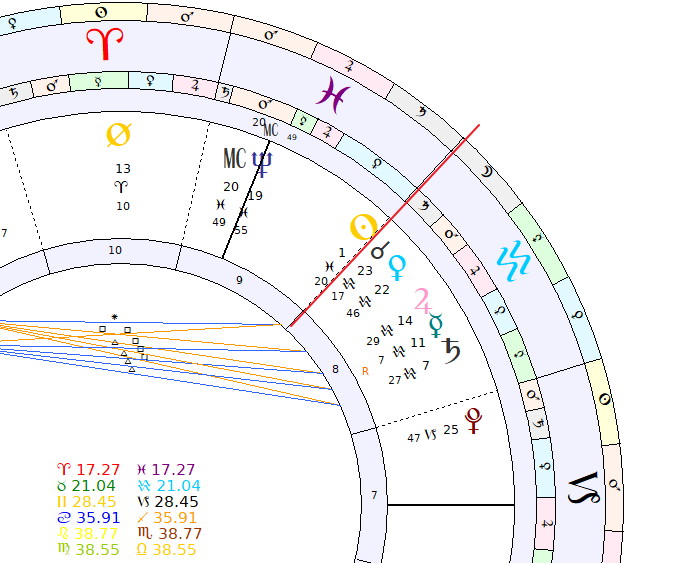 OK, so this isn’t strictly something that happens only on the internet. But lately, that’s the only contact I’ve had with other folks outside of my immediate family, because we are quarantining hard due to the pandemic. This is something that I used to hear often in conversations, and now I see online. I saw it again the other day.

People post an astrology meme, and then say “lol, this Pisces/Aries cusp feels called out.”

Or Cancer/Leo. Or whatever combination of two contiguous signs of the zodiac.

Students of astrology, as well as regular readers of this blog, will note that saying “I’m a [fill-in-the-blank-zodiac-sign]” just doesn’t fly among professional astrologers. And I would like it not to fly more often among amateurs, either.

Far too much attention is paid to the Sun sign in popular astrology, and even among beginning students. It’s the kind of thing that makes it easy for skeptics to point to astrology and “prove” that it doesn’t really “work.”

But anyone who’s been in the field for longer than a season or two knows that the Sun is just one of many parts that make up an astrology chart. There are 7 classical planets (including Sun and Moon), and 2-3 more recently discovered, but important, planets; 12 signs of the zodiac; 12 houses or divisions of the topics of life; and dozens of important fixed stars. (Not to mention some of the even more modern additions that traditionalists tend not to use.)

In modern psychological astrology, the Sun has been tied to the personal ego, the individual’s very self as the center of the chart. But classically, it did not have quite the same role. It has always had a greater importance than other points in the chart because of its predominance. It’s the brightest thing in the sky. It defines the season. It demarcates day from night.

But traditionally, the Sun has been far less about one’s ego and self-esteem than it has been about fame, honor, and glory. Ancient authors point to reputation, advancement, and promotion as things connected to the Sun in a chart.

I can’t help but connect the modern glorification of the Sun (see what I did there?) with the idealization of the individual and individual rights in the last few hundred years in more developed societies. While individual rights are important, the radical focus on them over the common good has led to some unfortunate situations where we as a culture can’t even take care of each other.

Other Planets in the Chart

Overemphasizing the Sun in a chart gives short shrift to all the other planets that have an important role to play. Venus signals what and how we love; Mars how we use our energy; Mercury our communication and learning styles; etc. Of course, each of these planets means much more than this short list. But that’s my point. When we say “I’m an X” or “I’m a Y,” we are engaging in the broadest generalization possible, and it is therefore almost meaningless. Not only are we equating ourselves with our Sun sign, we are probably focusing on a very narrow piece of what that placement even means.

But what’s really going on when folks say “I was born on the cusp, so I have qualities of both signs”? Let’s consider the make up of a person’s birth chart. Because the Earth goes around the Sun, and both Mercury and Venus are inside the orbit of the Earth, from our perspective, both these planets will always appear in the same sign as the Sun itself, or in one of the two signs immediately before or after the Sun.

Each astrological sign has 30 degrees. Mercury is almost never more than 28 degrees from the Sun. So much of the time, it’ll be in the same sign with the Sun, even if it’s quite a distance from it. And Venus normally stays within 46 degrees of the Sun (from our view on the Earth). That’s only one-and-a-half signs of the zodiac.

Remembering that the Sun, Mercury, and Venus travel at an average of 1 degree per day through the zodiac, this means that in many cases where the Sun is just a few degrees/days from the beginning or end of a sign, it’s not at all unlikely that Mercury and/or Venus will be in the sign that the Sun has just exited or is about to enter.

The ancients referred to the beginning and ends of zodiac signs as “boundaries” (among other terms). There is the thought that each sign is almost like a room, and when you exit the room or enter it, the door opens very briefly, then closes immediately behind you. You never stand on the threshold (astrologically). You’re either in, or you’re out.

This means that your Sun sign is either one or the other. Not both. Never both.

Let’s imagine, though, that your Sun has just entered Aries, but your Mercury placement is a few degrees back in Pisces. Your impulse for communication, logic, language, math, analysis, and other Mercury-ruled things is going to be much more Piscean than Arian. So you may engage much more in poetry, imagination, solitude, and non-verbal means of communication than in direct, straightforward, sometimes abrasive interactions with people. And this may cause some problems for you, since your Sun carries one instinct, while your Mercury carries another.

Another possibility is that a person is born with the Sun at the end of a sign a short while after dawn. This would put the Sun in one sign and the Ascendant (aka Rising Sign) into the next sign. Or conversely, born shortly before dawn with the Sun at the beginning of a sign. This places the Ascendant in one sign and the Sun in the next. Since the Ascendant represents the physical body, your health, happiness (essentially it is the closest point in the chart to representing you), and the Sun represents your vital spirit, we see another possibility for two adjacent signs of the zodiac being active in a person’s core make up.

In fact, one of the things that’s not obvious to non-astrologers is that two adjacent signs literally have nothing to do with each other, and don’t communicate with each other. At all. One of the most important polarities in astrology is Hot/Cold, a measure of high/low energy output. If one sign is hot, then the one following it is automatically cold. The other important polarity shift between the signs is that of Wet/Dry, a measure of connectivity/separateness. Half of the time when switching from one sign to the next, this polarity switches as well. So the signs really like to keep that door between them shut tightly, so that there’s no leakage.

So I’m not a Pisces/Aries‽‽‽

If folks want to discuss their personal characteristics in an astrological framework, I encourage folks to get into the habit of saying something like: “My Sun sign is Aries,” or “I have an Aries Sun.”

It may not seem like much, but it establishes a few things that over time may help shift the conversation:

1. The Sun isn’t the only important point in an astrology chart.

It’s entirely possible that a person exhibit traits that are common to two adjacent signs of the zodiac. But I guarantee you, it’s not because the Sun is close to a boundary and is “soaking up” energy from both signs.

2. You know enough about astrology to respect that fact that it’s not all about one factor (your Sun sign).

Even if you don’t know the other placements in your chart, if you’re going to use astrology as your excuse basis for explaining something about your own personality or habits, let’s respect the art enough to admit that the Sun isn’t the only thing happening.

3. You don’t identify with an astrological sign. You are a human being first.

This last point might seem unnecessary. But I’ve been to too many astrological conferences where the official badges they give to the attendees have a place right on them for your Sun, Moon, and Rising signs. So right there with your name, all the other astrologers know this about you before actually meeting you or experiencing you as a person. Maybe you’re just like your Sun sign predicts you will be. But maybe there’s a whole lot of other stuff in your chart that mitigates the influence of the Sun.

Let’s start with experiencing people as people. We’re complex. Any professional astrologer who has seen hundreds of clients’ charts has to admit this. Every chart, every person is different.

But you shouldn’t need an astrologer to tell you that.