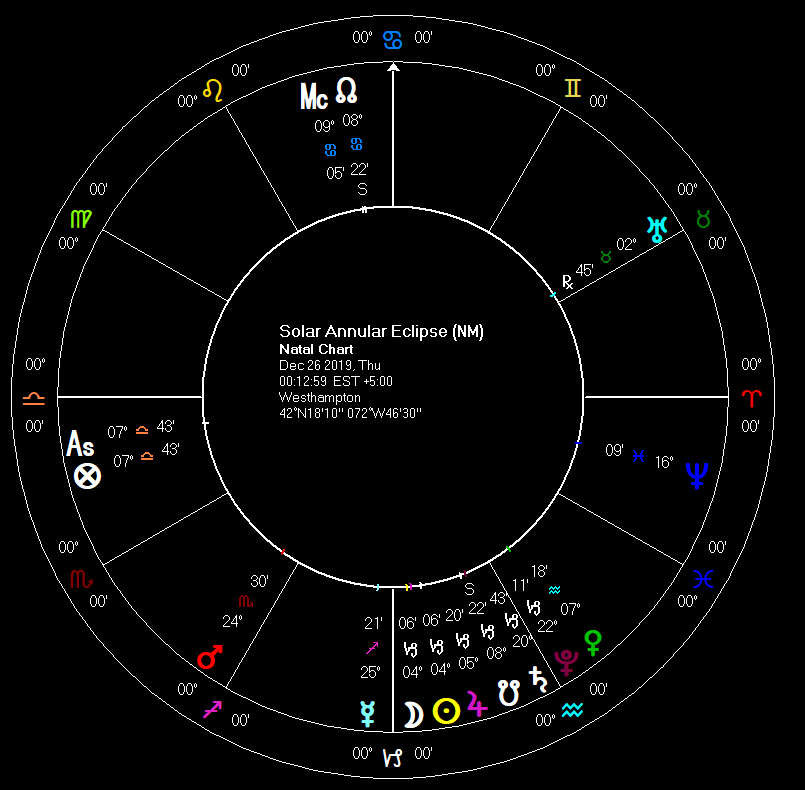 Today’s Solar Eclipse occurs just after midnight Dec 26 EST (still Dec 25 in other US time zones). It’s annular (meaning ring-like) which means that the Moon’s apparent diameter will be a bit smaller than the Sun’s, making the light of the Sun appear as a ring around the Moon. Because of the time of day, it will not be visible in the Western Hemisphere.

Astrologically, eclipses are always seen as less-than-optimal. The Moon is combust the Sun (that is, the Sun overpowers it because of its proximity to it), so the Moon is “damaged.” At the same time, the Moon hides most of the Sun’s light, so it, too, is “damaged.” It’s a South Node eclipse (bringing diminishment), so that brings even more severity to the outlook of it all. It is only one degree from Jupiter, but he’s in Capricorn, his sign of Fall, so he can’t help much.

Look to the house of your chart where Capricorn falls to see what area of life is likely to be affected by this. Having the eclipse there is like shining a big spotlight on those areas, and it may bring out some underbelly issues. That said, I’ll point out that all year long, Saturn, Pluto, and the South Node have been transiting Capricorn, making this part of folks’ chart pretty challenging already. So it’s possible that the eclipse may intensify or continue what’s already been going on at this point, rather than adding a completely new layer to it.

For each of the following rising signs, here’s a quick list of what house Capricorn is in your chart (using Whole Sign Houses) and what areas of life are likely to be most affected. Note that this is an abbreviated list, and that the signs/houses opposite Capricorn (Cancer) and square to it (Aries & Libra) will also be affected to a lesser degree.

If you are not sure of your rising sign, and you know your birth time, you can head over to astro.com to find out.