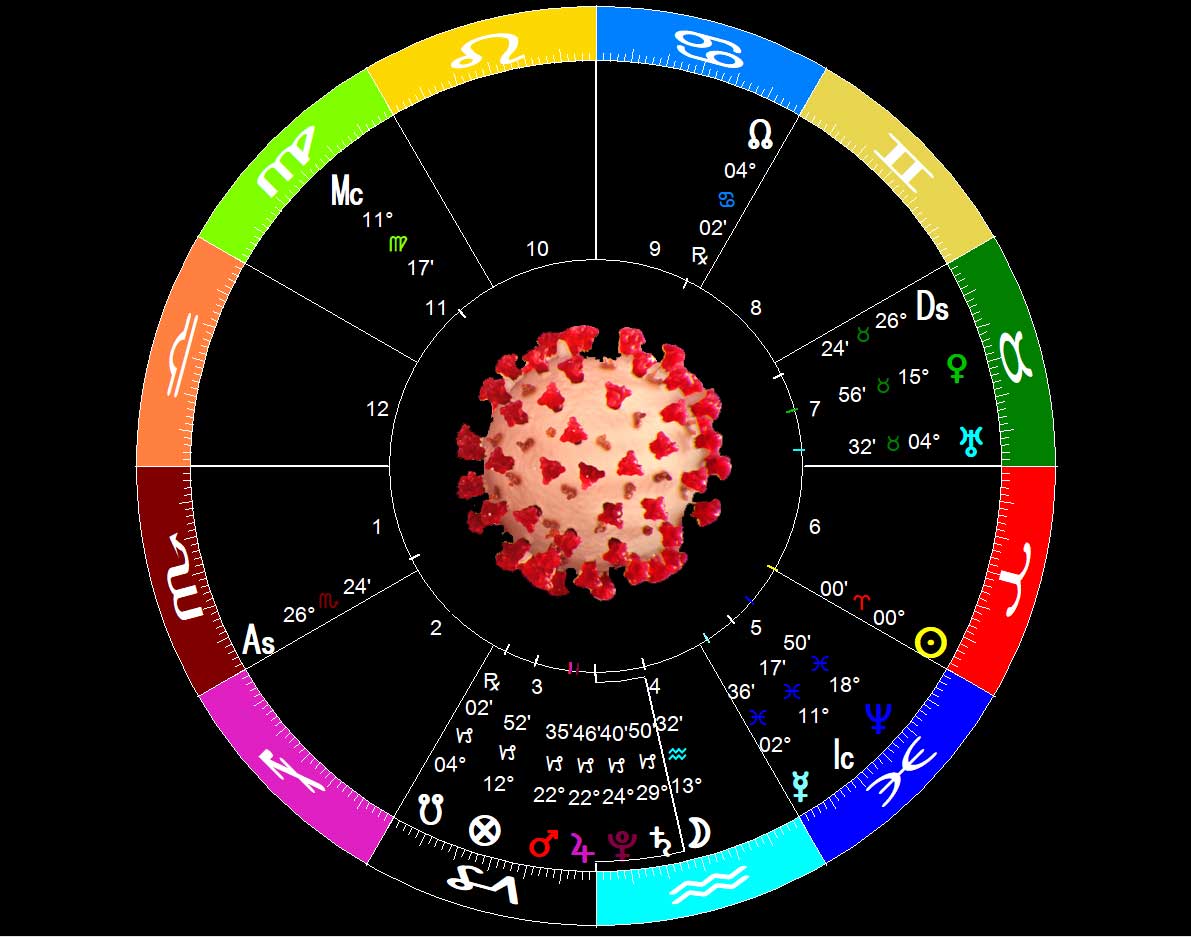 A friend recently pointed me to an article on The Wild Hunt website titled: Astrologers respond to “Will coronavirus kill astrology?” The article referenced a NYT article which in turn was based on an appearance on the show CBS New York by New York astrologer Susan Miller of the website Astrology Zone. On the show, Miller predicted a prosperous year, no recession, and not a peep about a pandemic. Well, reasons the NYT, if she missed Covid-19 and the recession (and if the article were written today they would probably now add the current protests against police brutality and specifically the police’s murdering of black Americans), how could astrology be real? And how could it survive Ms. Miller’s failing?

Because the timeline can get a little convoluted, let’s look at this in chronological order.

On Sunday January 12, 2020, Susan Miller appeared live in a 5-minute segment on the CBS New York morning news program to give her thumbnail predictions of the year ahead for each zodiacal sign. My regular readers will see red flags here already. The first one is the idea that anyone can deliver meaningful astrological information about anything in under five minutes. Another one is the idea that you can predict a year for each astrological sign. It’s true that many astrologers (including me) will make some prognostications for signs, but they are usually in depth, detailed, and come with appropriate caveats given the general nature of these types of forecasts. In other words, serious astrologers can’t get away with, “Yeah Sagittarius, it’s going to be a great year! Enjoy your travels! Gimme a high-five!”

For those following the actual (dubious) astrology in the clip, what Miller is doing is imagining each sign of the zodiac as if it were the first house in a chart. Now, that’s a long-respected way of getting an overall look at things for someone. But if you have some astrological background, it’s obvious that what Miller is doing is relating the position of the planet Jupiter to each of these rising signs. For example, she starts with Aries, and focuses on career. Why? Because Jupiter is in Capricorn this year, which is 10 signs away from Aries, and therefore in the 10th house from it. The 10th house is about (among other things), career. So far, aside from the fact that she focuses on only one planet, this is a pretty standard way to create a horoscope column for a newspaper or podcast. Likewise when she gets to Cancer, Capricorn is 7 signs away from it, so the focus there is on marriage and partnerships.

Then what’s wrong with it? Two major things. The first is that Jupiter in Capricorn is considered in Fall. That is, it’s in a part of the zodiac where it doesn’t have the ability to deliver things the way it promises. It’s a bit like the politician who promises to create a whole slew of new programs and spend a lot of money on things that need it, and then upon taking office, decides that it’s better to by fiscally austere and doesn’t deliver on any of those promises of abundance.

The other problem is that for the entire year, Pluto, god of the underworld (think death/rebirth, painful transformation, amplifying things beyond measure) is also in Capricorn. And for much of the year, Saturn is there, too. Saturn is the ruler of Capricorn, so he does get to “deliver the goods” that he promises by being in his own sign. But what are Saturn’s “goods”? In short, Saturn brings delay, denial, and destruction. Sometimes those are necessary, good, things. But even when they are, they’re not usually experience by humans as “good.”

So by focusing her predictions solely on a debilitated Jupiter — that happens to be in the same sign as Saturn and Pluto (think of them as the Death Eaters of the solar system) — she not only misses most of what’s really going to happen for most folks, but she also ends up predicting the exact opposite of what is likely to be most people’s experience. So for example when she gets to Virgo, she predicts “the best romantic aspects they’ve ever seen.” If Saturn and Pluto (along with debilitated Jupiter) in the 5th house are the “best” romantic aspects, I really would hate to see the worst.

(Side note: Miller explains how things go round in 12-year cycles — essentially Jupiter cycles — and then says that Virgo has “the best romantic aspects they’ve ever seen” this year. I’ll point out that the same transit she’s referring to happens every 12 years, so “the best romantic aspects they’ve ever seen” happened 12 years ago and will happen 12 years from now. Kinda blows a hole in her hyperbolic statement.)

Miller starts the segment by specifically assuring folks that though “they” (she doesn’t say who “they” are) are predicting a recession, there won’t be one on 2020. She says that it will be a “prosperous” year. This is exactly the type of things you find in sugar-coated horoscope columns. In order to keep people coming back, the writers are careful not to say anything negative, or make people “feel bad.”

I have a few comments about this.

The first is that Susan Miller, based on all available information, is a natal-chart, Sun-sign astrologer. That means that she uses general information about how the current planetary configurations affect each sign of the zodiac to make general predictions that may be applied to people’s own individual natal charts.

Natal chart astrologers do not usually analyze or study the astrology of recessions, pandemics, or social uprisings. Unless you have studied these things, it would probably be wise to zip it when being interviewed on live TV about astrology. The sad part here is that the hosts didn’t even ask her about the economy. She brought it up herself. It was a totally unforced error.

Situations such as the economy, world health, and social justice, which affect a region, a country, or the world, come under the umbrella of Mundane Astrology, or the astrology of the world. This is a very different branch of astrology from natal chart interpretation. Natal chart delineation and prediction calls for looking at a chart with a personal lens and a focus on specific details in order to work with a client as you explore what their potentials are and which of those might be actualized in the near future.

Mundane astrology is a whole other ball of wax, as they say. Here the astrologer takes a “macro” look at things (rather than the “micro” look of natal charts) to see what’s going on in the world, and where the hot spots might be in the coming cycles.

When analyzing or trying to predict world events, mundane astrologers use a slightly different set of tools than natal astrologers do. They look more at things like:

These are just a few of the most common tools that mundane astrologers use.

There are four generally recognized branches of astrology. We have discussed two of them so far: Natal (birth charts) and Mundane (world events).

The other two are Horary (questions) and Electional (timing).

In horary astrology, the client asks an important question and the astrologer interprets the chart for that moment to find an answer, usually with no regard whatsoever for the clients birth chart (though having that information can sometimes add a little detail).

In electional astrology, the astrologer works with a client to determine the most auspicious moment(s) to begin a project, like open a business, get married, send an important letter, etc.

Most astrologers today focus on natal astrology. Some focus on natal and one other branch. Horary and electional are similar in their rules for reading charts, and some astrologers focus on these together. There are a few astrologers who have diligently studied all four branches, and practice all of them with proficiency. But that’s not common. In particular, being a top-notch mundane astrologer calls for a knowledge of history and world events that many (within and without astrological circles) do not pursue.

The New York Times Has it Out for Astrology

As I write this, I’m reminded of Kanye West’s “George Bush doesn’t care about black people.” He may have been onto something there, too.

A search of astrology references in the NYT will show that almost all of their articles are critical of the practice. While at the same time showing a profound lack of understanding about what astrology really is and what astrologers actually do.

Which leads to a larger point: the media are particularly bad at identifying whom to ask about astrology.

Susan Miller aside somewhat (because, as I said, she wasn’t asked about a recession, she offered the comment herself), the media seems fairly unaware of the fact that there is a whole network of astrologers out there, many of whom are really good at what they do. It would not take much to find some folks in the astrological community to ask “whom should I ask about what’s going to happen in the world in 2020?” or similar questions. Respectable astrologers in the field will point them to the best mundane astrologers who are practicing.

But the media is just a reflection of the general public’s lack of awareness of what astrologers actually do and how they ferret information out of charts.

So when the NYT reporter writes an article wondering if astrology can survive its failure to predict Covid-19, we might be inclined to forgive their ignorance of the fact that most astrologers have been looking at the Saturn/Pluto/Jupiter/Mars/South Node build-ups in Capricorn through 2019-2020 mostly in the context of people’s own natal charts, and not how it might affect world events.

But I’m not that forgiving. Because there’s a thing called “journalistic integrity” that should be exercised here. Journalists are supposed to be some of the best researchers and investigators around. And they often fail in the simplest of quests for information. Like this one.

I don’t blame the Susan Millers for missing the Coronavirus in 2020. Because that isn’t their field. After all, we don’t blame a proctologist for missing a diagnosis of heart disease or diabetes. That’s just not their field, even if they are all medical doctors. A psychiatrist is not the person to ask about your foot problems.

But I do blame a national, historic newspaper for printing poorly researched hit pieces.

If they would spare a few minutes, they could have answered their own question as given in the subtitle of the article: Will Coronavirus Kill Astrology? The pandemic has affected all of us. Who saw it coming?

Who saw it coming? A lot of astrologers did. And some of them weren’t even dedicated mundane astrologers. Anyone who listens to Chris Brennan’s The Astrology Podcast knew that something was coming. Just go back and listen to the forecasts for 2020 year ahead, and the monthly forecasts for the first few months of the year. (Note: in May, Chris did an episode specifically on this very issue. Listen to it here.)

Now-late French astrologer André Barbault saw it coming back in 2011.

In other words, astrologers who study such things saw it coming. But the NYT didn’t bother to ask them about it.

And I’m not denying the value of sun-sign astrology (like horoscope columns). But they might not be the right tool for the job.

So making a sun-sign astrologer responsible for predicting a global pandemic and recession is nothing short of character assassination — of astrology and astrologers.

The Gray Lady is not always so lady-like.