Why I do Medieval Astrology, Part 3: Dignity and Rulership

Picking up where Part 2 left off…

Dignity
So then what exactly is “dignity”? The simplest explanation is that a planet that is essentially dignified (that is, which has dignity based primarily on what sign it is in), gets to work the way it wants to work. There is a basic harmony between the nature of that planet and the nature of the sign it’s in. This allows the planet to operate in a dignified, or graceful way. (Note that this does NOT mean that the planet and the sign are the same, as some schools of modern astrology teach.)
For example, Saturn is sort of like an old math teacher, making sure that the numbers add up, and that everything is recorded fairly. Saturn rules Capricorn and Aquarius, and so is dignified when in these signs. Capricorn is about the old structure, and cold, hard success, Aquarius is about community-building. So when Saturn is in one of those signs, he is able to operate the way he wants to operate: without emotion, concerned with structure, measuring out everything fair and square. So he is unimpeded in his efforts. Saturn is also exalted in Libra, which is about balance, and also about being fair and square; so this is also a place where Saturn operates well. It’s true that Libra is about relationship, but Saturn is the part of it that makes sure that the relationship has a solid structure, and that the partners involved are treating each other justly. It’s not the mushy, lovey-dovey part or the lust represented by Venus. So the nature of the signs here support the nature of Saturn. And although Saturn is considered a “malefic” (literally an evil-doer), he is almost kind when he is in these signs (especially Aquarius and Libra, since the heat of a daytime/masculine/positive sign warms up the ice-cold Saturn).

Saturn being dignified in Aquarius, and exalted in Libra gives it a level of rulership in all three air signs, that is, the Airy Triplicity. So even in Gemini, the third air sign, Saturn is considered dignified. Once you get past Sign, Exaltation, and Triplicity, the next two levels of dignity divide each of the signs into smaller portions. The Terms/Bounds divide each sign into five unequal divisions; the Faces/Decans divide each sign into 10 degree segments. So even if a planet isn’t dignified by one of the major dignities (Sign, Exaltation, Triplicity), it will be dignified somewhere in that sign. This is of critical importance in many areas of delineation, but especially in matters of fate and free will, which we will see later on.

Rulership
Now in addition to being dignified when a planet is in the proper sign and degree of the zodiac, it also gets rulership over those signs and degrees. So if a planet is dignified in a particular sign, it is also said to be the ruler of that sign. That sign is connected to that planet, even if that planet happens to be off in some other part of the zodiac. For example, let’s say that someone has Pisces Rising. The sign of Pisces is ruled by Jupiter; when Jupiter is in Pisces, he is quite well dignified. But what happens when he’s somewhere else in the chart? What if he’s in Virgo, which, being the opposite sign from Pisces, is a place where Jupiter is debilitated? Virgo does not support Jupiter’s being Jupiter. So when I consider the affairs of the first house (primarily, body, health and happiness), I consider Pisces in general (the sign on the first house/Ascendant), but also the condition of Jupiter in Virgo, which is not well off. Again, this is something that would be completely missed by modern astrology. In addition to the dignities that Jupiter has (or debilities, as the case is here), we must examine what house he’s in, and what aspects he makes to other planets, in order to arrive at an accurate delineation of the affairs of the first house. 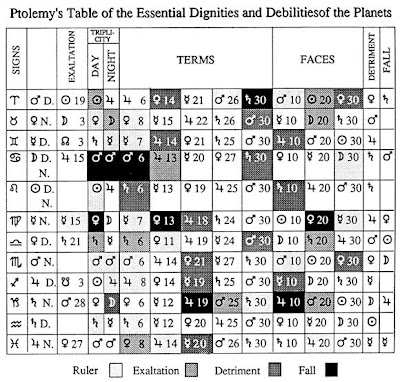 In order to get a very detailed picture of this first house, however, we need to consider all five levels of planetary rulers of Pisces: Sign, Exaltation, Triplicity, Term and Face. As I’ve said, Jupiter here rules Pisces, and he’s in lousy shape, so it does not bode well for one’s health or happiness. So what is a person to do if they have this configuration in their chart? Are they totally screwed? Not necessarily. In traditional astrology, there are at least four other rulers to examine for help: the Exaltation ruler, Triplicity rulers, Term and Face rulers. Venus, for example, is exalted in Pisces, and is therefore the exaltation ruler. So if Venus is well placed in the chart, and in good condition, the person can look to that area of the chart to pursue issues of health and happiness, rather than depending on their debilitated Jupiter. As a matter of fact, whenever they depend on Jupiter to secure these things, they will be disappointed; since Jupiter is in the seventh house in Virgo, this means that relationships (7th house) will work against the health and happiness of the native. But if Venus is in one of her own signs, say Taurus, where she is dignified, let’s say in the third house, this would give the native an area of life to pursue health and happiness more successfully (3rd house = short journeys, siblings, etc.). But if Venus were in lousy shape too, we can still examine the three Triplicity rulers of Pisces (Venus, Mars, Moon) and the Term and Face rulers of the particular degree of Pisces that is Rising.

Now, why have I gone on so long about this? Because, as mentioned above, one of the modern criticisms of Medieval astrology is that it is too fatalistic. I hope that this somewhat protracted example demonstrates that although there is a certain amount of fate indicated here, Medieval astrology shows more precisely a fuller range of options for success than modern astrology ever could. Far from being fatalistic, it seems to me that this is exactly the kind of information that allows a person to make free will choices in their lives.

I’ll leave it there, though I’ll have a lot more to say on this matter in the future (and hopefully in shorter posts).