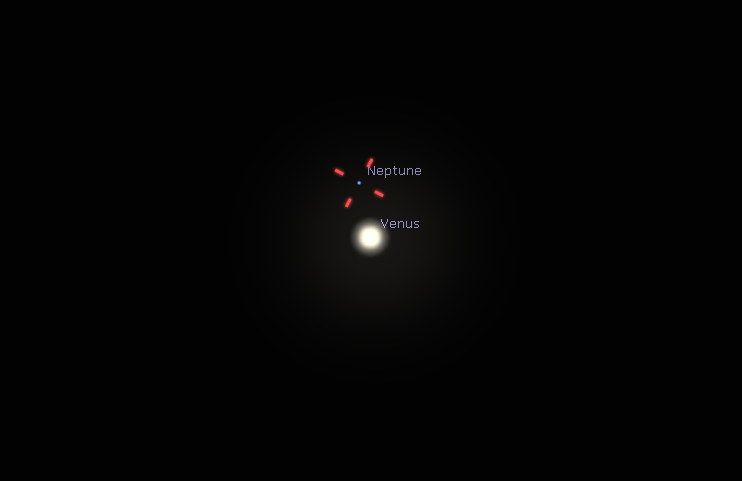 It’s a busy week among the planets. On Wednesday, Mercury sextiles Jupiter, bringing together the ability to combine attention to small details and the potential to hold the bigger picture in mind simultaneously. However, the same day, Venus and Neptune conjoin exactly. Venus-Neptune is the “Knight in Shining Armor” combination, as it tends to romanticize how we look at love and lovers. Often, it can go so far into fantasy as to be quite (self) deceptive. If you start a new relationship now, enjoy the romance, but try to resist the urge to jump in with both feet right away. Wait until the fog of romance clears a bit and reevaluate.

Thursday sees Mercury trine to Pluto. Watch for revelations of previously secret information, and the possibility that parties may switch sides in a conflict or competition.

On Saturday, Venus conjoins Jupiter and on Sunday she sextiles Pluto. This extends the lovey-dovey feel of her earlier conjunction with Neptune, but it can also inject a strong physical attraction and desire as well.

On Friday, Pluto turns retrograde; since he doesn’t rule signs, the effects are likely to be felt more in whatever house of your chart Pluto is in. With Mercury and Venus aspecting him this week, his station (stand-still while turning retrograde or direct) is likely to energize those aspects even more, since a planet standing still takes on a certain “extra” energy of sorts.

Friday also has Mercury arriving home to their own sign of Gemini. This is beneficial over the next few weeks for words (written and spoken), paperwork, sales, buying things, technology, and social gatherings.

Saturday April 30 features a partial Solar Eclipse at 10º Taurus. A Solar Eclipse happens when a New Moon is close enough in latitude to block out at least part of the solar disk. The New Moon is at 4:28 pm Saturday and the eclipse begins before and ends after that. It will be visible only from parts of South America, Antarctica, and some Southern Pacific Islands.

This eclipse, being in Taurus, is ruled by Venus, which is in Pisces (where she’s exalted and quite dignified) and conjunct Jupiter (which rules Pisces and is also quite dignified).

The general sense of an eclipse tends toward the negative or urgent, since one of the Lights – in this case the Sun – is being blotted out by either the Moon – as in this case – or the Earth – as in the case of a Lunar Eclipse. Either way, it can herald important beginnings and endings in our lives, and on the world stage.

This eclipse in Taurus is also only 4 degrees away from disruptive Uranus, which has been there for a few years, messing with things like food production and supply chains. Look in your chart for what house Taurus is, and you may find that the next few months bring about some important changes in those areas of your life.

The strong effects of this eclipse may be mitigated by the fact that the eclipse’s ruler (Venus) is in such good condition. But it may also be the case that something that looks really good (Venus) is interrupted at the last minute or ruined by something (represented by the eclipse).