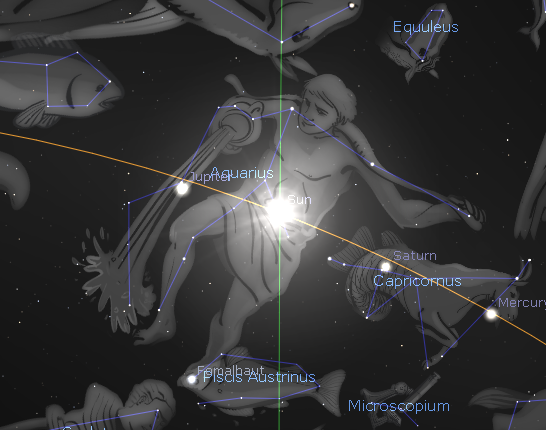 Uranus turns direct on Tuesday. Since it doesn’t rule a sign, it’s less significant than other retrograde cycles on a personal level. (Also, it spends nearly half of every year retrograde, so it’s fairly normal operating procedure.) But it is likely to have effects in two areas: on the societal level, and in individuals’ charts if they have sensitive points that are triggered by it. In this case, it’s 10º Taurus. We’re likely to see more changes and reversals in all-things-Taurus. For example, food production, land, large animals (specifically bovines), meat in general, luxury items, and so forth. Last year we had the exact Saturn-Uranus square, and while it won’t reach exactitude again this year, it will come quite close off and on for a while. This change of direction sends Uranus inching back closer to the almost-square with Saturn, so we’re likely to see an increase of tension again between old and new, conservative and progressive.

On Wednesday at 9:39 pm, the Sun enters Aquarius, marking the middle of the winter in the north (and the middle of the summer in the southern hemisphere). While the light continues to grow, this is typically the coldest time of the year. Aquarius is opposite Leo, and is focused more on the community than on the individual. It’s not the greatest time to try to stand out, unless it’s in a community context. It’s also the month that is most dangerous to vitality, given that the Sun – a key indicator of vitality – is opposite his own sign.

On Sunday the 23rd, Mercury and the Sun conjoin as the former continues their retrograde. In the days leading up to it, we are likely to experience some of the stronger effects of the Mercury retrograde cycle (if they affect your chart this time), since being that close to the Sun renders any planet nearly ineffective, due to the Sun’s light overpowering it. There will be a few hours on Sunday when Mercury stands at the heart of the Sun when they will be highly effective, before fading out again. Watch the daily post on Saturday and Sunday for details.