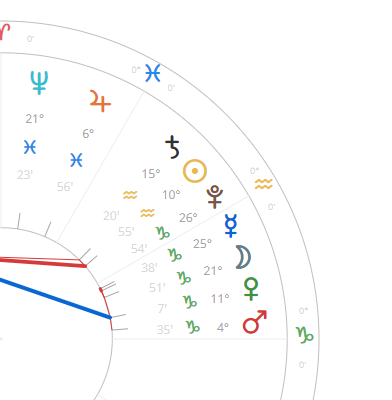 Mars and Mercury enter Capricorn on Monday and Tuesday, respectively. Mars is exalted here, meaning that he’s comfortable and powerful. This can be a viciously direct Mars, or just an exceedingly focused one. Even though Pluto is at the other end of the sign, and Mars won’t catch him until late February, just having the two co-present in Capricorn can be an indicator of violence and ruthlessness. If you need surgical precision, now through the beginning of March is excellent for that. Just be careful not to be to harsh in your methods.

Mercury in Capricorn is prone to turn our thought to deep things, and to consider how the past reflects on the present. It’s a good time generally for serious thought, but will improve after Mercury goes direct on February 3. On the 28th, still-retrograde Mercury conjoins Pluto, which they will do again on February 11 after turning direct. These are the 2nd and 3rd hits, with the first one occurring back on December 30. So it’s probable that any Mercury-Pluto issue(s) that was(were) set into motion then is(are) coming back for a second and third chance. This transit can bring about the opportunity for deep thought and consideration. We are likely to see an intensity of thought and a passionate focus; or we might be caught in compulsive communications and mental obsessiveness. So beware.

On Saturday the 29th, Venus turns direct, also in Capricorn. The Moon will be there that day and the next, which means that the Moon, Mars, Venus, Mercury, and Pluto will all be co-present in Capricorn. This could be a heavy or serious time overall, with convention, tradition, and the old ways of doing things weighing heavily now.

While we have that pull toward the past, toward tradition and conservatism happening, we also have the Sun squaring Uranus, exact on Sunday, which will try to pull us in the exact opposite direction. This makes the second half of this week and the beginning of the next a stressful time, when we may feel caught between two completely divergent currents. Which of these catches us will depend largely on how it ties in (or not) to our own charts.