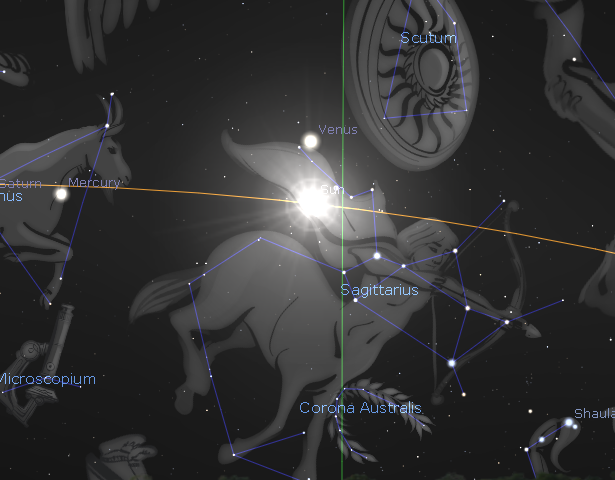 This week has only two non-lunar alignments and both belong to Venus.

On Wednesday, Venus and Neptune align by a sextile, encouraging good feelings, love, romance, and fantasy. However, Venus is still retrograde, so this is somewhat more scaled-down that it might be otherwise.

The more important happening is Venus’s conjunction with the Sun on Saturday. When a planet gets very close to the Sun, the rays of the Sun “burn” it up, and it’s considered “combust” or ineffective. However, when that planet is about one-quarter degree from an exact conjunction with the Sun, the tradition (going back hundreds of years) is that the Sun super-charges the planet for that short time. The name for this is “cazimi.” On Jan 8, for part of the day, Venus will be in that position. But she’s retrograde, and though she’s moving away from it, she’s coming off a really difficult conjunction to Pluto (eventually, she’ll turn direct and go back across Pluto again).

Because she’s retrograde, it’s the inferior conjunction – that is, Venus passes between the Earth and the Sun – which astrologically is associated with personal, private relationship affairs (rather than public or artistic ones). So it’s more likely to bring back (retrograde) past relationship issues that are unresolved or are from long ago. The superior conjunction (when the Sun is between Earth and Venus) is a much more public one, but that doesn’t happen until mid-late October.

Venus has just gone retrograde, too, so she’s super slow-moving (which is not good for a planet, astrologically). She retrogrades for 40 days, and won’t go direct until January 30, by which time, she’ll be conjunct Mars for quite a while, which is fairly unstable to rely on for Venus workings. So while you might be tempted to engage in “all things Venus” at this time, you should keep expectations scaled down to a minimum, and expect some likely visitations from the ghosts of relationships past.

(All times Eastern) Today holds much of the focus of the week, as the Sun squares Uranus and Mars sextiles Neptune, while Venus leaves Cancer for Leo. On the one hand, we may find ourselves Read more…